BEFORE THE SPANIARDS ARRIVAL

On the hillside of The Manas mountain was situated the MUISCAS Military Fortress, called as SUMONGOTA or BUSONGOTA, which was made up by a circular wooden fence, with a diameter of approximately a 1000-meters; length; this was protected by a canopy made of woven cotton cloth, which had 4 meters height, and 4 meters width, and it was used to shield themselves from both the sun and the rain as well.
Within the fence there were a lot of large houses which were filled with different sorts of ammunitions and military equipment, such as truncheons, darts, slings, launchers; there were also provisions such as corn, beans, dried meat, and other prepared food.

The TISQUESUSA ZIPA got there fleeing from the Spaniards pursuit and didn´t manage to settle himself in the Fortress, so he had to flee leaving behind the litters, in which he used to be carried along; this latter was made of fine wood and gold plated, and inlaid with silver and emeralds.
The MUISCAS, upon becoming aware of the Spaniards vanguard, set off to encounter them in a place known as The Manas; there, these were defeated by the Spaniards, who moving forward, got to the Fortress; there, the Indians lay hidden within the Fortress; a brave Indian warrior dared to challenge the Spaniards; then, the Spaniard Colonel Lazaro Fonte, by riding on his horse, took the Indian by his hair, and headed to his troop; then, by lifting him, showed him to his comrades in arms;  the Indians, upon seeing this, fled being wholly terrified.

Mr. Gonzalo Jimenez de Quesada gets there on March 23rd , and, altogether with his vanguard, remain in the place for eight days, stocking up the food left by the Indians; subsequently, they were mainly consuming deer meat, which was well known in the zone; some of the settlers of the fenced country houses, by believing these were like gods, offered them incense burning and gold. Then, the Spaniards set off to celebrate the Holy Week which took place in Chía.

In 1579, the construction of a doctrinal church for the Indigenous Shelter, with the purpose of evangelizing the Indians, is authorized.

In 1598, in order to get the water from the Simca River, today called Río Frío, an irrigating ditch is made, through which the water will be taken to the place where the town is situated today.

In 1592, the first doctrinaire priest, Pedro Roldan, gets to the place.

In 1593, the Indigenous Shelter is visited by the Hearer, Mr Miguel De Ibarra, who conducted the first census, adding up 776 inhabitants.
The town consolidation dates back to 1598, when the construction of the doctrinal church was finished by the bricklayer builder Juan Del Hoyo; said construction cost $2.125= Col. Ps., and 4.000 bricks were used.
Between the years 1602 and 1603, the Hearer, Mr Diego Gómez de Mena, was assigned to distribute the lands and to hear the Indians complaints, who claimed that the Councillor, Cristobal Tinoco, who owned the farm where, nearby the Río Frío, the water was taken from, had taken away the part of the land through which the water was extracted, and said that the irrigating ditch had been partially destroyed; because of the preceding,  on February 22nd, the opening of the irrigating ditch was ordered, so the water could flow through it again.

On May 3rd, the expropriation of the farm is carried out by the Commissioner Judge Rodrigo Zapata, who, taking Don Juan Cacique by his hand, along with the Captains and Indians, took possession of the farm as property of the Indigenous Shelter, so they could get the water supply again.
The first baptism certificate of the CAXICA town (with time the letter X was replaced by J) was issued by the Real Crown of His Majesty the King, on January 1st, 1604.
In CAJICA, the first music and singing school is created in 1605 by the Jesuit Priests: Juan Bautista Coluccini, and, Joseph Danney, whose objective was to evangelize through the singing in the mass celebration. 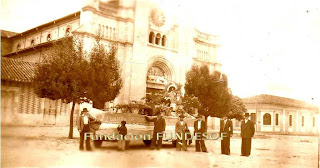 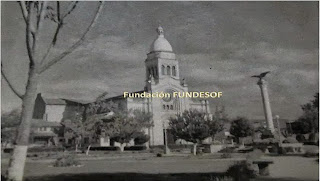 The parish temple began to be built in 1925, being the parish priest Dr. Julio Avellaneda; under the management of the Salesian engineer Giovanni Buscaglione, its architecture was founded in brick at sight, with details on the arches, elegance and monumental scale.


The mason builder was Proceso Villaraga, who was a Cajica native.
The parish was finished in 1946, under the management of the architects Juan de la Cruz Guerra and Julio Atehortúa, being the parish priest José del Carmen Castro.

Years later, it was renovated over the plans of the architect Carlos Arbeláez Camacho.

In 1985, the priest Carlos Emilio Salas, hired the architect Eduardo Romero Franco, who, due to the great deterioration condition in which the church was found on that moment, achieved one of the major restorations to the temple; He reduced the size of the windows, plated the columns with stone and remodeled the altar giving it a sober and elegant appearance.

In 2015 the priest Eduardo Suárez Poveda begins the process of decorating   the temple with beautiful stained glass, a work of art work of the Master Rubén Darío López.
In 2017 the priest Ignacio García, recovered the old high altar, adapting it and installing it in the apse of the Temple

The temple that was consecrated to the Immaculate Conception, has four beautiful works of Rococo art made by the master Luis Salvador Carmona, who is considered as one of the best masters of art of the XVIII century in Spain.

The fact of who brought the works of art from Spain to Cajica is still unknown.

St. Francis of Assis: This image has been requested on several occasions by the Franciscan priests, as to having it brought it to their premises altars; however, the parish priests have so far opposed to this request.

Crucifix of the Sacristy: Beautiful image carved in wood and it is venerated during Holy Week.
Immaculate Conception: Patroness of the parish; this image was carved on wood, and it is of a surpassing beauty.

St. Roque: For many years, he was the patron of the town; This saint is claimed to work miraculous especially of people´s health.

Chairs of the Seat: It has three beautiful ball-legged chairs, from the 18th century.

Legalization of the Property.
The land of the Temple and the Priest House were both delivered to the Catholic Church of the municipality under the government of the engineer Orlando Diaz, and with the support of the deponent Councilor Mario Calderón; Shouldn´t this be timely done so, because of freedom of religion and because of being a property of the Municipality, a member of any religion could claim to worship inside the temple. 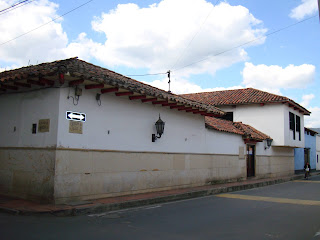 During the beginning of the XIX century, this house was owned by the Bethlemitas nuns, place where the women`s school worked for some time; later on, this house was adapted by Mr. Enrique Cavelier, becoming this way into an elegant Culture House of French style, endowed with a beautiful garden and a fountain in the centre, a carpeted library, with fine tables, and an excellent funding of books; there were also halls for art exhibitions; it`s worth to highlight that art works of the master Botero were exhibited in there. 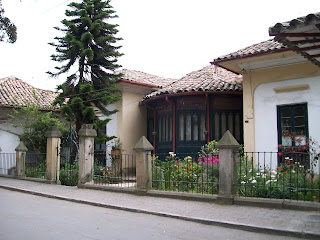 It was built late in the XIX century; it was one of the most beautiful buildings in the square frame; It belonged to the illustrious Cajica resident Mr. Andres Ospina.
The Colonial House, also called as “La Casa del Vampiro Briñon” (The Briñon Vampire House), became widely known for this was the place where the soap opera “The Widow in White” was filmed.